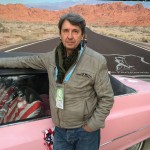 Music has been an essential part of Nicolas ‘s life since his youth when he attended the renowned college of “Les Cadets de la Montage Noire” near Toulouse in the southern part of France .This historical  academy  where he performed  his first gigs  also housed  such famous artists as Hughes Auffray and Claude Nougaro who preceded him .

Then, from the underground scene of Toulouse to the famous Golf Drouot in Paris, to the distinctive finale of Le Tremplin d’Or in 1973 which he won with his then  band Pêche Melba , Nicolas pursued his dream by  founding the band Week End Millionnaire which was signed to Warner Music France and  got to be a successful French band in the 80s .

Alongside of this,  Nicolas,  who had also become an  emergency doctor , became known as Dr Rock (named as such by the famous rock magazine  Rock& Folk in 1983) after bringing forward the notion of medical management at large concerts and events ,  where he got to meet the biggest stars on the planet in light  of the discreet medicalisation of such big events . During this time Nicolas also pursued his own  musical career with a new band Season, and most recently with an acoustic trio The Key West Band .

His first solo album “Carry Me Back” filters the numerous influences Nicolas has witnessed through his various encounters with artists amongst whom he has lived  his most intense passion  .

From Burt Baccharah to the Beatles, CSN&Y or the Doobie Brothers , we hear in his pop rock compositions, the vocal harmonies and acoustic guitars,  the clear and colorful atmosphere of a California sunset .